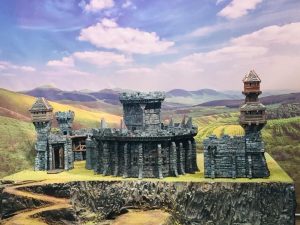 Jeremy is back with his 4th Kickstarter.  Coming off the very successful Elf Outpost, he has released the Savage Realms Citadel kickstarter that is fully compatible with his previous Kickstarters.  This is a very modular system giving you the tools to create a very customized keep.  This latest Kickstarter seems to be shaping up as the best Kickstarter so far.  The models look good, and print really well.  (Jeremy was good enough to send me some to print, and they really do make some spectacular buildings.  (Just as the trees from the previous one were awesome as well).  I sent Jeremy off some questions about his previous Kickstarters and how they relate to his latest one.

Check out the sample walls on Thingiverse.

Gloomhaven has taken over a lot of gaming time. I’ve also played some Game of Thrones Catan and Kingdom Maker recently.

I’ve been 3D Printing since 2013 which is also when I started 3D Modeling.

The First Couple I learned a lot about organization, engineering, and mesh trouble-shooting. This one is about staying in the saddle so-to-speak. I’ve previously been really reactionary to the funding ticker. If I had a bad day I’d start second guessing myself and change things up mid-campaign. This time I have a solid 4 week plan it terms of making the campaign an event. I think that is probably a natural progression for all the designers in this space.

Before going into it I want to clarify the Open Peg is a vertical build system that can be used WITH regular tile clip systems. The intention is to provide a system for situations where using a clip system is not ideal, which can happen when building vertically.

Overall the system creates the potential for a genuine creative experience for the end user, and that is the biggest win in my mind. In fact, many buildings variations are effectively infinite. OpenPeg is superior to nubs in terms of structural integrity. The stacks are more stable and there are no little nubs to break-off. It also allows you to swap out building assets and re-arrange a lot more parts along the vertical access. It is also easier to work in overhang details.

Nubs are great if you want buildings without versatility that can print in a few large parts. From what I can see, that’s there the trends are right now. Regardless I intend to stay with it a while and see what happens.

Aside from things I’ve discussed before, I’ve just sort of been going with the flow, and right now that means terrain for 3d printing.

As for my first models, I recently released all my early work on thingiverse if anyone wants to see where I started out. It seems like a lifetime form where I am now.

I really enjoy the design process and just kind of stay in the moment. Finished work is a dead dream.

In November of 2017 I started work on 4 concepts. This was one of them.

The designs are always sort of intuitive, I have a notion of a goal but I leave a lot of space to just play with parts and see what happens. I’ve always resented sketch books and concept drawings. I really think they just create preconceptions that make you blind to the thing you are supposed to find in the work.

I think I use rhino more than other designers, otherwise I’m using the same stuff as everyone. None of it really does everything. There’s so many weird issues, you really need to be fluent in the strengths of many programs. Maybe one day there will be one ring to rule them all. .

The citadel was a forced idea. I wanted to do my version of the traditional wall and stronghold design, I decided the time had arrived. For me, “inspiration” is just an idea system, and that system is basically a rolodex of references spinning in my mind.  Citadel is probably 100’s of ideas “frankensteined” together.  I’ve had people comment that it reminds them of a castle in Skyrim or the movie “Willow.” However the only intentional influence is in my use of timber walkways on the outer walls, which is an idea used in the Warhammer:Total War video game.

Thats all of them, but I intend to stick with forts and the buildings inside them, so there will be more. I have some parts for stacking on regular OpenLOCK buildings as well.

Basically OpenPeg is a series of three flat plates that are pinned together with a couple serrated pegs. These plates create ledges. the ledges fit inside of the building shells, or the shell is stacked on top. The sets are compatible because I stick to a set of defined shell shapes in all kits. The exception is the Elf Outpost which used round shells but I recently released some crossover parts to make it more kitmash friendly.

I want to thank Jeremy for taking the time to answer my questions.  These are really some beautiful pieces.

Check out many more photos from this project. 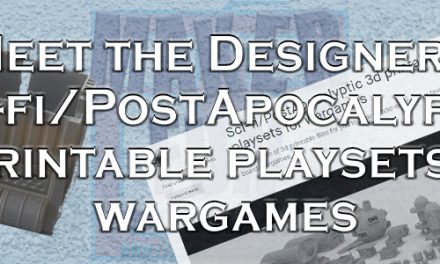 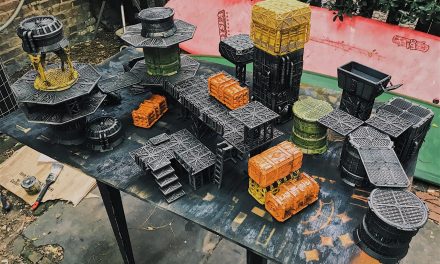 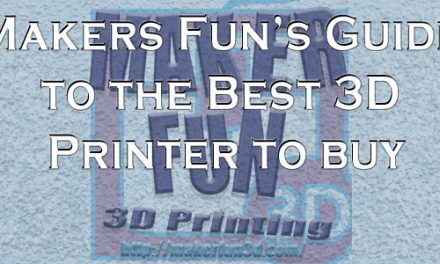