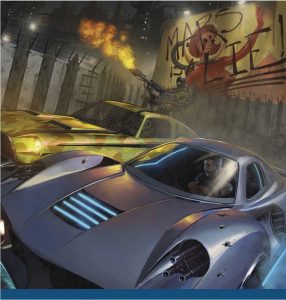 This is the first guide I have done.  For all guides on Gaslands, please click here.

Gaslands has been my latest miniatures game obsession.  It’s a new game from Osprey Games by Mike Hutchinson.   This will be a bit different from my normal guide, since instead of just terrain, I’ll also be talking about car mods that are both 3D Printable and conventional.  I’ll also be linking to the brilliant playlist from Game Terrain Engineering and other videos.  I really hope that this will be the first part of an ongoing, evolving series of guides to help source vehicles, STL files, Game Mats, and other conversion pieces.

Gaslands is a post apocalyptic car battle game.  You purchase small cars (think Hot Wheels or Matchbox) and then convert them to make them look the part of a wasteland racer.  There is a very active community on Facebook and Reddit.  You can also go to the official site to get other counters/dice/etc.  He’s also got a “friends of Gaslands” program that allows others to make templates and other gaming pieces for Gaslands by being part of his Patreon.

Gaslands features a number of vehicles to choose from, from a Bike up to a tank, plus Gyrocopters and helicopters.  Most games, though, will probably stick with Buggy to Monster Truck levels of Mayhem.   Though I did pick up a semi truck to convert to a war rig.  Once you figure out your vehicle type, then you get to slap some weapons on them.  You can put turreted machine guns, mines, rockets and even carry around a box of grenades to throw at opposing drivers.

So many goodies are in the Hayland Terrain Gaslands Packs.  When I first published this, earlier today, I had NO clue that Hayland Games created these 3d printable parts for gaslands!  I’ve already picked up the first two sets, and will be getting more.  As an added bonus, I was just given a special code.  If you add 11 or more bundles to your cart, and then enter the code makerfun3d you get 15% off.  Nice little bargain, since lets face it, like Pokemon, you gotta get them all.  🙂

Quick Photo of some of Hayland’s 3D printable parts. 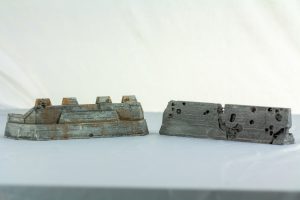 When thinking about the terrain, think about what you may find at a demolition derby or circle 8 race.  Shipping Containers, old tires, barrels, mounds of earth, anything along those lines.  Much of this terrain is designed for 28mm, so it will require a size reduction to get it to the correct scale for Gaslands.

One of the first things for me, that came to mind, was the Tire Barricades and Barrels from Duncan ‘Shadow’ Louca.

The shipping containers from Warlayer are a pretty obvious choice.  There are several variations.  Plus the crane would work as a centerpiece, and give cars something to race under.  Several of his pieces from the past 2 Kickstarters would actually make great terrain for any racing table.

Imperial Terrain I have featured for their Star Wars Legion terrain, but the cargo bundle could add some diversity to your terrain.

If you watch the upcoming Youtube videos, Necroplex comes up.  I have not gotten around to printing any of it yet, but it would make for some terrific terrain with the pop can conversions.  But, that is not all.  They have pipes that you can lay down.  Turrets and gun pieces that could be resized to fit vehicles, crates and barrels for your maps and other pieces to make your game map come to life.

Last but not least, is Thingiverse. I have a curated collection just for Gaslands and other car combat games.  Most of these pieces are to 28mm scale, so they need scaled down for Gaslands.  My Scatter Terrain: Modern collection has a number of pieces that would also fit well.   Finally, Scatter Terrain: Universal has a number of pieces that would work as well for rocks and hills among other items.  Also, check out the people I follow on there.  You will find additional pieces of terrain that they have released more recently, or I missed.

Converting Hot Wheels and Matchbox cars is a lot of fun.  Grab a car, take it a part, put on pieces and parts to make it look cool, add some guns, paint it all and you are ready to go. 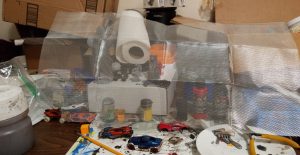 The first thing I have done, is pulled out my leatherman and used the file to file down the outside.  It gives it more of a weathered/damaged look to the paint.  It also helps later paint jobs hold better.  The Blue police cruiser I converted mostly had nuln oil added to it, to give the body a more weathered look.  I really like the look of this wire mesh for the windows.  I need something heaver to put on the outside of the vehicles as well.  I use Picture Hanging Wire to represent cables across the vehicles.  I’ve seen two types.  This rope type and the kind you see in my photos that is more braided.  I think it enhances bumpers and other lines on the car.  I recently ordered this silver chain to represent chain on my cars.  I have not used it yet.

You see Plasticard used quite often in builds, too.  It is a rigid plastic that is easily cut.  The Diamond Plate plastic sheets by JTT Scenery make outstanding armor plating.  A little silver paint, and then a black or nuln oil wash and you are good to go.  I also grabbed some 3/32″ brass tubing to be used as gun barrels on cars.  Last, but not least, I went to The Reuseum.  It’s a tech-recycling place that has all kinds of goodies.  In my recent trip, I picked up all sorts of electronic items for next to nothing.  Computer chips, capacitors, and more.  These can be painted up and add additional ornamentation to your models.  If you have a bits box, you probably have tons of ornamentation ready to go. 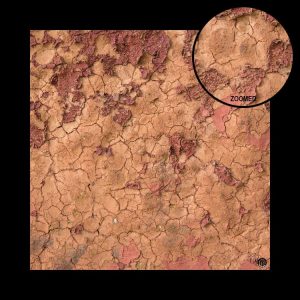 I’m a fan of the Mats by Mars mats.  I talk to one of the owners on Facebook and have been impressed by the quality of their maps.  I think a good game mat just helps with the feel of the game.  Along those lines, I have 3 suggestions.  Koncrete Block – an expanse of flat concrete for your cars to race on.  Swallowing Sands – An arid, desert expanse featuring sand as the main material.  Finally, Badlands – a blasted, crusty expands of arid dirt, and my favorite of the 3.  I hear a new mat is forthcoming with tire marks and will be great for combat racing games like Gaslands.

Several weeks ago, i came across Game Terrain Engineering from a “Build-off” between him and Wyloch.  In looking at his channel, I discovered he was converting cars for Gaslands.  Shortly after watching all of his videos, I ended up picking up the Gaslands rules (Both physical and Kindle for convenience) and started building my own cars this past weekend.  Check out his Playlist that features Gaslands. (He has a companion website here: http://gameterrainengineering.com ) Expect it to grow over time.  Guerrilla Miniatures Games also has a number of videos on playing Gaslands.

Ready to pick up Gaslands?

What I love about this game is how inexpensive it is.  Hot Wheels and Matchbox cars I find between $0.94 and $1.00 in various stores for each car.  Some cars make great combat vehicles, others donate bits for other cars.  Check out the Facebook group for some awesome conversions.  I am a neophyte compared to them.  My cars are passable, but there are works of art that others are doing.  If you want to go cheap and easy, Hot Wheels has a number of cars that are Star Wars licensed that come with weapons already to go, and quite honestly, look awesome.  Jimmy Figiel from the Facebook group has an awesome idea for May the 4th.  They are going to have a race night featuring the Star Wars cars and the terrain will be planets and asteroids.  It’s a great community, and a great game.  Check it out.

If you want to look at other game guides, I have a Necromunda terrain guide and several Star Wars: Legion terrain guides.

If you are interested at getting into 3D Printing, check out my new user guide for 3D terrain.  The first 3 pages will probably be the most interest if you want to learn about 3D Printing.  If you don’t have a 3D Printer and just wanted printed parts, Death Car Toys prints the Hayland pieces above, and Archania’s Workshop, LLC prints a large number of other modelers works. 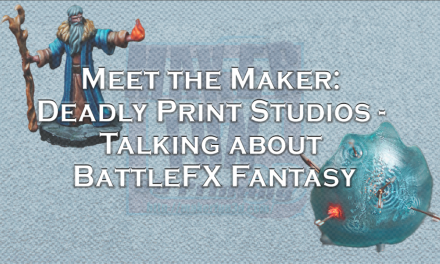 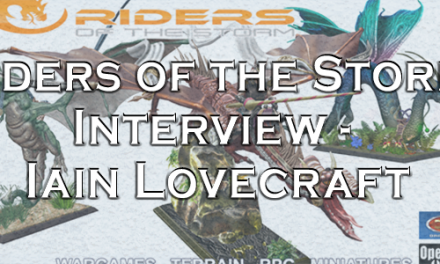 Riders of the Storm – Interview with Iain Lovecraft 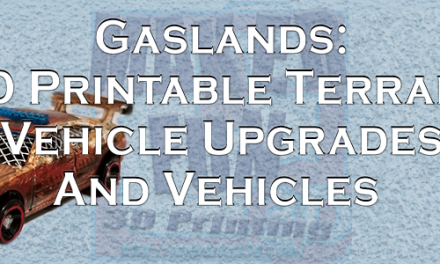