Since I wrote my first guide to 3D Printable Gaslands Terrain and parts, there has been a number of new pieces that have come out for Gaslands or work well for Gaslands terrain and upgrades.  Gaslands is growing by leaps and bounds and the desire for awesome upgrades for our vehicles has been getting bigger as well.  This is actually a pretty exciting time to be a Gaslands fan, seeing how it is taking off.  If you want a good link to bookmark, you can go to the Gaslands Master Page and see all of my guides for Gaslands.

Yesterday, I saw that Mats By Mars released their Gaslands compatible map, called Petroland.  This mat is designed for the table sizes used in Gaslands and gives you a good start for your game table.

Game Terrain Engineering just released a great new video this week about creating a pretty kick-butt War Rig.  Lots of great inspiration can be found in his Gaslands Playlist.

In the far future of Gaslands, the world has devolved and Mars is where the powerful now live.  The desolate earth is covered with Gaslands Tracks where contestants compete for their chance to go to Mars and a better life.  These maps come to life with awesome terrain.

Corvus Games Terrain is known for their Star Wars Legion terrain. For Gaslands, he has a new 3D Printable bundle that features walls, crates, barrels, and traffic separators.  For those without 3D Printers, he also offers printed terrain. I’ve printed the shipping container and traffic blocks, and both look pretty awesome.

Hayland Terrain has been a pretty big supporter of Gaslands with terrain and car parts.  They have a Website, and run regular Kickstarters that either features terrain directly for Gaslands, or is easily tweaked to fit.  The destroyed truck from a previous Kickstarter is a great example.  The large version is the 28mm scale piece.  The smaller one I reduced to 70% and printed it. It fits perfectly into Gaslands.  Since my last guide, they have also released a Gasland Track Accessories and Street Ruins accessory packs.  I’ll talk even more about Hayland in the car upgrades section.  Hayland Terrain also has some resin based pieces they sell, and have official printers for their parts.

Heresy Lab is a newer company to me.  I caught their last Kickstarter, right near the end of it.  They had a massive amount of terrain, and tank (I think more for 40K proxies), but I knew it could all be sized down to fit for Gaslands.  I haven’t printed a ton out, but I found the cones look good at 70%, and look even more to scale at 50%.  If you want a wide variety, check out the Industrial Terrain set.

Duncan ‘shadow’ Louca is a well-known designer with a very active Patreon.  I’ve picked up his Tire Barricades and Barrels for Gaslands.  These required resizing (I don’t remember what I sized them to, and I did not put them in my spreadsheet).  A good starting point, I have read is that going from 28mm to Hot Wheels scale, you want to downsize about 73%.  I generally find 60-70% to be the optimal percentages.  He doesn’t have a ton for Gaslands, but what he has looks great.

WOW Buildings has a Kickstarter that ends soon, that looks like it would be a great fit for Gaslands.   It features a great number of post-apocalyptic terrain pieces that I think would make for a great Gaslands table.

While great terrain is awesome to use to play on, lets face it, the real draw to Gaslands is converting Hot Wheels and Matchbox cars.  This section will cover a number of modelers that feature parts you can print and put on cars.

Hayland Terrain not only makes terrain, but are probably the most prolific Gaslands designer out there.  Their latest release gives them a whopping 14 packs for Gaslands that include terrain, templates, and car upgrades.  I just purchased their latest Armor & Ram pack last night and have them on the printer this morning.  They have a large number of guns, armor, and rams to add to vehicles.

Along with the Gaslands terrain, Duncan Louca released a Kickstarter featuring Tanks, he has now released them on his website to purchase.  Reducing the guns to about 70% seemed to be a good number, though, larger ones, I think needed reduced further.

Heresy Lab has not only released a bunch of pieces of terrain, but also a bunch of tank pieces.  These tank pieces can be re-sized to fit different cars.  I have included a picture showing off a couple of turrets as well as possible wheel replacements.

Die Cast Parts makes a number of upgrades for Hot Wheels sized cars.  Most of their stuff comes printed, but there are a few models.  While the paid models seem insanely high priced, they do have a few free models that are worth picking up.  It’s a great way to add more character to your cars.

Hero Forge is well known for making custom 3D Printed characters for your RPGs.  They have recently added motorcycles to the mounts section, giving you the ability to create a rider on a motorcycle.  Since finding properly sized bikes with riders has proven to be difficult, this is a great find.  I’ve printed up one set so far, of their futuristic bikes and plan to do more soon.  The biggest problem with Hero Forge, is the price.  It costs $9.99 to get one model.  While you can spread it across multiple prints, you still only have one pose. But, they do look good, and are the right fit for your game.

I’ll admit I have not spent a lot of time on Thingiverse looking for vehicles but I have seen a few printed and think it may be a good place to look.  I just did a search and there are a number of cool looking things I will need to delve deeper into.  I do have a curated collection on thingiverse to collect Gaslands items. Most will need resized for Gaslands, please be aware of that.  I do want to bring special attention to Sable Badger‘s work in Thingiverse.  Pick up his terrain and car upgrades.

Do you need a 3D Printer or don’t have one?

I did a preview on the Ender 3. I am working on a review for it, but I am constantly blown away by this inexpensive ($200) 3D Printer.  The Hayland Terrain pieces I said I was printing above, are printing right now, on this 3D Printer.  If you are looking to get into 3D Printing for terrain and vehicle upgrades, this is printer I recommend right now.  If you want to do tiny parts, the Anycubic Photon I did a review on as well  and is the best bang for your buck.

If you don’t have a 3D Printer, I did put together a guide on getting prints done, as well. 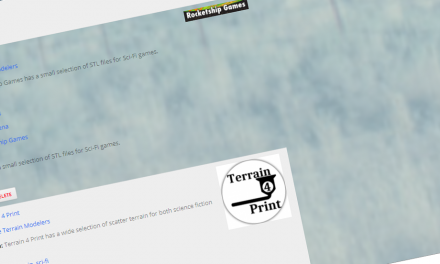 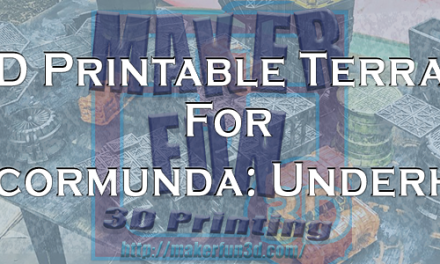