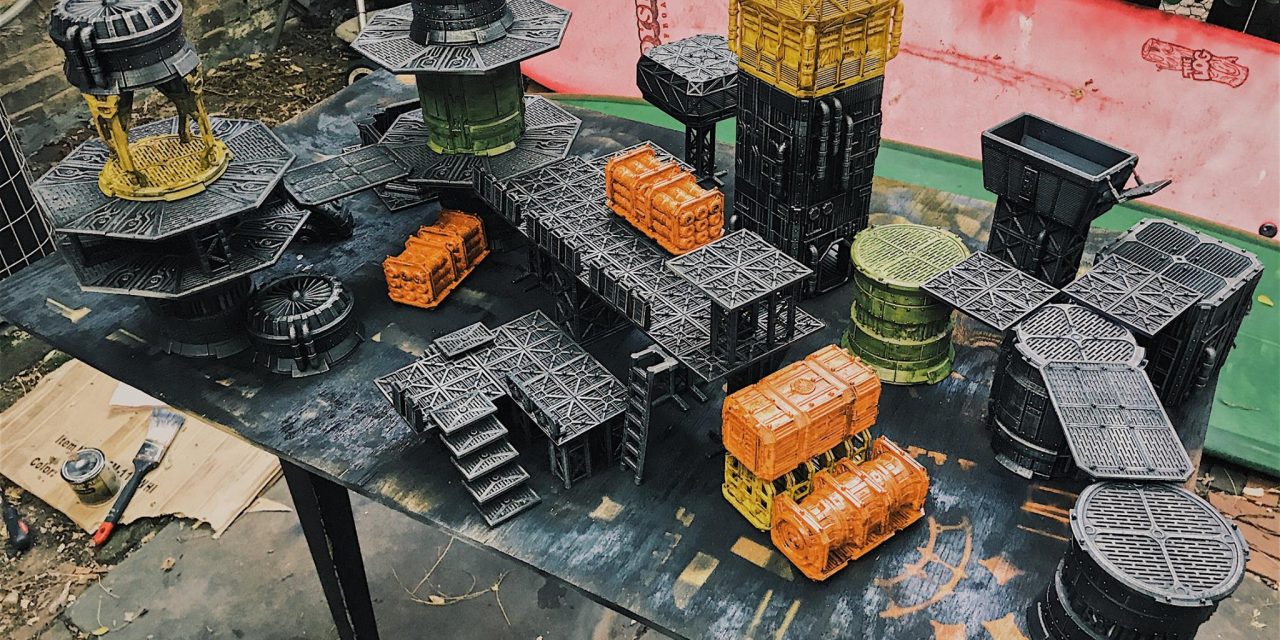 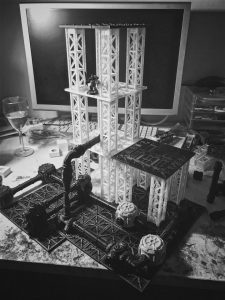 Necromunda: Underhive is a new Miniatures game from Games Workshop I am really looking forward to. Necromunda was one of the first miniature games I purchased. I used to play with my buddy David Hopkins. We had a ton of fun in the sewers and underbelly of the Warhammer 40K universe. The plastic bulkheads and cardboard walkways made for a fun 3 dimensional game world.  Here are are in 2017, and Games Workshop is bringing back the classic.  I’ll admit, I was skeptical of the new game, seeing the cardboard, flat board pieces.  But this video from Tabletop Minions put my mind at ease.  What we have been seeing is a basic game that is good for beginners.  The “advanced” game brings back Necromunda of old.  In looking at Necromunda, Shadow War: Armageddon was brought up.  The thought of being able to play a game with 40K miniatures that doesn’t cost the GDP of a small country is really interesting to me.

There have been a few terrain makers that when I see their terrain, I think, there is Necromunda terrain (even though I sold the game years ago… it still holds a piece of my gaming heart).  With Necromunda’s release being imminent, I thought I would put together a post of great terrain STL files to pick up.  But, I think for this one, I am going to expand it even further.  I’m going to go beyond just terrain and look at game mats to use and maybe some music to set the proper mood. I’ve created a 2nd article now, featuring Necromunda Terrain to go along with this one.  You can view the Necromunda terrain Guide as well. 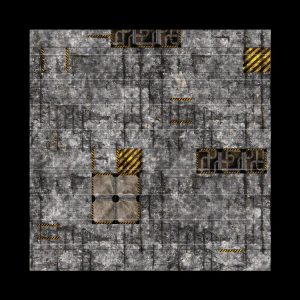 Starting at the bottom, lets look at Game Mats.  I’ve played on many tables that have cool, modular bases, but they can be pretty expensive.  I like game mats since they are a lot less expensive.  Since Necromunda: Underhive and Shadow War: Armageddon are based on the old the old Necromunda system and share many similarities, I am guessing that Necromunda will be a 4’x4′ board like Shadow War is.  So, my first suggestion, and probably the most obvious is Mechanica by Mats by Mars.  The other one I think would be fitting is Shattered Soil showing the hard bitten earth that is being fought over.

Here is the fun part.  The 3D Printable Gaming terrain.  There are a number of modelers out there that make terrain that is very fitting for the 40K world.  Here are some modelers that make terrific terrain for a game of Necromunda or Shadow War. A lot of the terrain that has been put together by Warlayer Terrain fit the 40K style.  From crates and containers to walkways and even the crane, Warlayer has created a number of great terrain pieces that would look great on a 40K table as well as fitting for the Necromunda table showcasing the Underhive.

The Tower City pieces are perfect for a Necromunda: Underhive board.  Watch for the next Kickstarter coming up in a few weeks, that will feature even more terrain that fits this look, as well as some major pipe works.

Printable Scenery’s recent kickstarter gave us a ton of new scenery for Necromunda.  The campaign, called Future Gothic fits right into 40K.  Along with the future Gothic pieces, the Sci-Fi scatter terrain has some nice looking terrain as well. 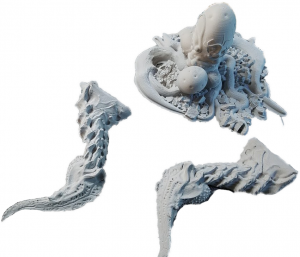 Worlds over Run : Thorn ads a certain… otherworldly quality to your table.  It’s unclean.  This is the realm of the Tyranids and other xenos that are trying to gain a foothold.  These pieces add a lot of organic shapes that would be extremely fitting in a Tyranid game, or to show where bugs have gotten into the Underhive of Necromunda.  This Kickstarter brought us pieces for bugs and space marines, so it fits in a 40K universe game.  While I feel like the above two Kickstarters seamlessly fit into the industrial feel of Necromunda: Underhive, I think this terrain is a little more fitting for Shadow War: Armageddon.  Either way, this is one of my favorite terrain sets because of the organic shapes, and adds something more to your underhive board than just the plain industrial feel.

Terrain 4 Print makes some great terrain.  His recent releases I featured in my Star Wars: Legion scenery guide.  Going back to his Kickstarter, Terrain 4 Print released a Sci-Fi Barricade that would be fitting for a ganger base, or more terrain to fight around.  His latest releases are coming from Patreon and he is a person I highly recommend helping out.  He makes some great terrain pieces that prints beautifully. 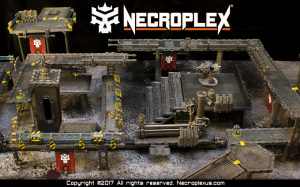 Necroplex completed a Kickstarter that melds hobby to 3D Printing.  This method is kind of unique.  You print out their pieces to go along with other normal hobby methods of terrain building.  So, you can use foam-core, dowels, and other parts you normally see used to bring terrain to life, but you print these pieces and glue them on to give the pieces more strength and character.  I kind of view this as the best of both worlds where you can save money by using foam core and other materials to build the core of your terrain and use the printed pieces to reinforce them.  This also means you can print up more parts quicker, since you are not printing the entire walkway.

This list is by no means all inclusive.  I keep a directory of 3D Printable Terrain and Miniatures modelers.  Right now, there are 40 terrain modeling sites listed.  Everyone here, I have purchased from.  I’ve backed several other Kickstarters and have purchased other models as well.  Peruse the terrain directory.  Search it, I have tried to use good tags to help you find the pieces you are looking for, quickly.

I have several collections on Thingiverse.  In particular, I now have a Necromunda centric collection that features bulkheads and other terrain that is designed for, or very fitting for Necromunda and Armageddon.  Along with this collection, there are a number of other collections that include tiles, scatter terrain and other items that would fit a Necromunda table.

Don’t have a 3D Printer?

Terrain Foundry and  Archania’s Workshop is a one-stop shop for many manufacturers of terrain mentioned here.  They carry Warlayer, Terrain 4 Print, Worlds over Run, and more.

If you are new to 3D Printing, I put together a guide just for you.  It starts out explaining the difference between FDM (great for terrain) and SLA/DLP (Great for miniatures) printers.  Then, the 2nd and 3rd guide help you choose the right printer for yourself to purchase.  From there, you can read the rest of the guides to learn more about 3D Printing in general.

Music for Setting the Mood 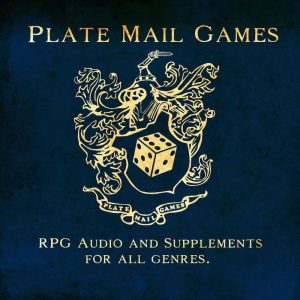 I’ve been a fan of using gaming focused sound tracks to add a little something extra to games.  While I think they can take Roleplaying Games to the next level, I do think they also can help set the mood and bring a little more excitement to a miniatures game.  I’ve put together a Pinterest board to bring together a number of gaming audio resources.  But, for simplicity, I am going to link t specifics by Plate Mail Games (I’ve backed a few of his kickstarters, and have never been disappointed, plus have been part of his Patreon for more than a year). These are affiliate links to DriveThru RPG, but I am going through my collection to make recommendations and have purchased a large number of his tracks personally.  A good starting point would be the Sci-Fi Audio Starter Pack [BUNDLE].  This gets you 10, 10 minute loops.  The step up from that is the Sci-Fi Audio Collection [BUNDLE].  This one includes a TON of tracks to use.  There is also the Horror Audio Starter Pack [BUNDLE] that has another 10, 10 minute loops.  I like these background loops for ambiance.  If you want another great source, Erdenstern MP3 Albums can be purchased from Amazon and you can download a few tracks directly from their website.  I do prefer the 10 minute loops from Plate Mail Games, but Erdenstern is pretty spectacular in its own right.  If you really get into music, you can use Scene Sound to mix audio files, and randomly play shorter ones to create a more robust audio experience.

There you have it, 3D Printable terrain for Necromunda: Underhive and Shadow War: Armageddon. 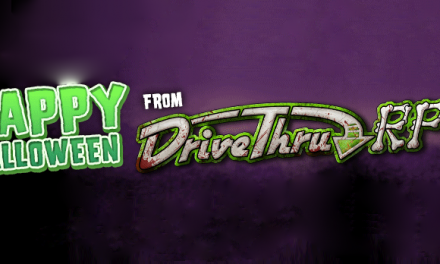 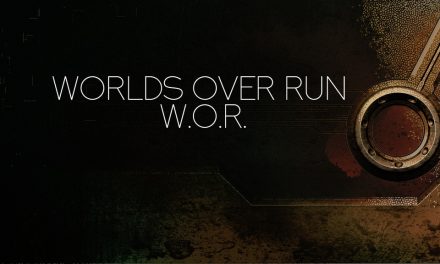