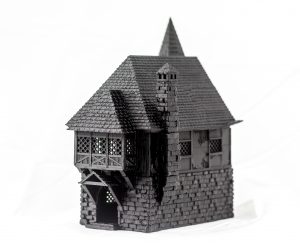 James and Dawa make up the creative minds behind Infinite Dimensions Games and the Wightwood Abbey Kickstarter.  This is their first Kickstarter, and it has already crushed its first 3 stretch goals.  There are currently 10 active Kickstarters, and this one has taken off in the midst of all of this competition. This is an ambitious project that showcases an abbey and its surrounding buildings.  This would be a great set of terrain for both WWII miniatures games as well as fantasy and medieval historic wargames, not to mention RPGs from those time periods.  They sent over a few STL files I have printed and I have to admit, this building looks amazing.  Do yourself a favor, and check out this Kickstarter.  At the end of the article, I have a gallery of images from the this model.

The Wightwood Abbey Kickstarter has a great looking, and printing, piece of terrain.  This prints without supports and just prints beautifully.  I’ve been really impressed so far.  I can’t wait to check out the rest of the line in person. 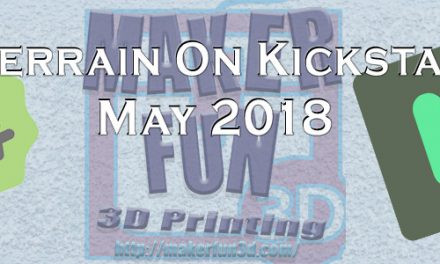