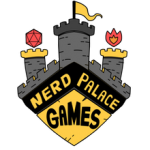 Short Description
Cody Alan Brown is the creator and director of Nerdpalace Games. He has been an avid tabletop gamer since the age of 13. Cody has never lost his passion for the things than bring him joy, and dinosaurs and miniatures are among the top 5! Primeval Clash will be his first game. Cody blames co-creator Alex for introducing him to the world of tabletop miniatures and gaming. Alex (the left half of Nerd Palace Games) has been a gamer for 33 years and has been designing games since age 13. He joined the Air Force in the '90s, then worked in gaming and comic stores until he was able to open his own store in Asheville, NC from 2003-2008. Now he works in someone else's game store is much happier.
Website
Nerd Palace Games
Kickstarter
Nerd Palace Games on Kickstarter
Category
Modelers: Printable Miniatures